In his annual summer press conference Tuesday, Mike Krzyzewski offered his first public comments about Duke’s three incoming freshmen, combo guard Elliot Williams and power forwards Olek Czyz and Miles Plumlee. The three will compete for time on a team that Krzyzewski said “should be the most talented as we’ve had in the last four years.”

More on Krzyzewski’s comments to the public and to The Chronicle later today and throughout the next week.

But in the meantime, what do you think about the three freshmen? How will they affect Duke’s play next season? Offer your comments below. 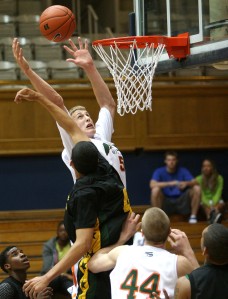 2009 Duke commit Mason Plumlee has watched three games inside Cameron Indoor Stadium, but had never played in his future home arena until Friday night, when he scored 14 points and grabbed 11 rebounds as his AAU team, the Indiana Elite, won in the Bob Gibbons Tournament of Champions.

The 6-foot-10 power forward elicited “oohs” from the crowd when he slammed home a putback in the second half, and also wowed some spectators with a behind-the-back, backdoor pass to a cutting teammate late in the first half.

“It was fun, I like it,” Plumlee said after the game. “It’s my new favorite place to play.”

Mason’s brother, Miles, also committed to Duke in late April after being released from his Letter of Intent to Stanford. Miles, who will come to Durham for the second summer session, is at home in Indiana working on his game and hitting the weight room.

“When I was making the initial decision, playing with him was a big part of it, and I just didn’t want to go all the way to the West Coast and be that far from home,” Mason said. “Now that he’s coming to Duke, it’s really all I ever wanted…. He’s really skilled, but it surprises people how explosive he’s gotten. He’s been in the weight room, working really hard, and he’s so explosive now, he still surprises me sometimes.”

Mason, who goes to school four hours away in Arden and said he will come to as many games as he can next year, noted that he pressured Miles “as much as he could” to come to Duke. Their youngest brother, Marshall, was scheduled to play in the Triangle tournament, but twisted his ankle and stayed at home.

He also said he plans on watching Kenny Boynton, scout.com’s second-ranked 2009 shooting guard, this weekend to try to sell Duke.

Duke commit throws down a put-back slam in his first game in Cameron as current Blue Devil Marty Pocius watches in the background.

The 2009 signee said he was planning on talking to fellow recruit Kenny Boynton to try to sell Duke to him.

“We are fortunate to land a player of Miles’ caliber this late in the recruiting process,” Krzyzewski said. “He is a versatile player that continues to grow and mature physically. Miles gives us another skilled big man that can be an impact player on both ends of the floor.”

Sounds awfully similar to what we said on May 2 after Plumlee first signed: “It’s always a positive when you can add a 4-star recruit in May, especially when your frontcourt could still use improvement.” Perhaps we have a reader in Duke’s most famous coach?

Miles Plumlee, a 2008 power forward, committed to Duke Thursday, just one week after he was granted a release from his Letter of Intent at Stanford before former Duke associate head coach Johnny Dawkins was hired. Plumlee is the older brother of 2009 Duke recruit, Mason Plumlee.

Miles will join combo guard Elliot Williams and power forward Olek Czyz in Duke’s Class of 2008, which had another scholarship open because of the transfer of Taylor King to Villanova.

As for our analysis of the commitment? Well, it’s always a positive when you can add a 4-star recruit in May, especially when your frontcourt could still use improvement.

One of the more overlooked aspects of men’s basketball associate head coach Johnny Dawkins’ taking the head coaching position at Stanford is how the whole process began: with former Director of Athletics Joe Alleva, of course.

One final twist: 2008 recruit Miles Plumlee, brother of Duke 2009 commit Mason Plumlee, received a release from his Letter of Intent to Stanford after Johnson left. Now that Dawkins, a potentially familiar face, is at the helm of the program, will Plumlee re-sign his LOI? Will he precede his brother at Duke? Or will he go somewhere else?

What do you think?