Former Duke star J.J. Redick, the ACC’s all-time leading scorer, has struggled in the NBA after he was drafted 11th in 2006. He has never truly found his way in the Orlando Magic’s system and even asked for a trade last year. Looks like that won’t be happening now, as the Magic picked up its $2.8 million option on Redick’s contract for next season.

When he was drafted, Redick signed a two-year deal with two one-year options.

Redick has averaged 5.2 points per game in his two-year NBA career, playing in 76 games with no starts.

The Sports Blog is decidedly nonpartisan, but only one former Blue Devil football and basketball player is the body man for a presidential nominee. Reggie Love, essentially Barack Obama’s personal assistant, recorded this promotional video urging Duke students to register to vote.

Props on the Pauly Dogs mention.

Nelson, the captain of last year’s team and an All-ACC performer in his senior season, signed with the Golden State Warriors Tuesday. A Bay Area local, Nelson earned a spot on the team with a strong performance on the Warriors’ summer teams in Las Vegas and Salt Lake City, Utah. Nelson and Golden State played five games in Sin City before traveling to Salt Lake City for four more games.

Terms of the deal were not disclosed. Nelson went undrafted in the 2008 NBA Draft, marking the first time since 1997 a Duke player was not taken.

Former Duke basketball star and Shaw head coach Robert Brickey has signed on with Joanne P. McCallie to be the women’s basketball program’s assistant director of basketball operations, McCallie announced in a statement Monday. Brickey was released from Shaw in March when his contract was not renewed.

Before taking the helm at Shaw, Brickey was an assistant at James Madison, Southern Methodist and Army. He also served as the athletic department’s community outreach coordinator in 1999. In his new role, he will coordinate off-campus camps, on-campus recruiting and marketing efforts—all part of the program’s push for greater recognition.

“Robert’s passion for Duke is totally motivating to all of us here,” McCallie said in a statement. “Having the opportunity for him to work with our student-athletes and allow them to glean from his experiences at Duke as a student-athlete and somebody who has pursued the highest level, will be excellent for our program.”

Brickey graduated from Duke in 1990 after a four-year career playing for Mike Krzyzewski. He led the Blue Devils to three Final Fours, including a national championship appearance in 1990, when he was a team captain. He brought his Shaw teams to Cameron Indoor Stadium for preseason games the last two seasons.

2007 Duke graduate Shannon Rowbury, the fastest American in her field, took seventh place Saturday morning in the 1,500-meter final at the National Stadium  in Beijing, finishing 3.58 seconds behind Kenya’s Nancy Langat, the gold medalist. Rowbury’s finish was the highest ever by an American.

Rowbury was in fifth place with 600 meters left and fourth with 500 remaining but lagged behind in the final laps. The 2007 national champion in the indoor mile and Duke record-holder in the 1,500m was the only American to qualify for the final.

Shannon Rowbury, a 2007 Duke graduate, advanced to the finals of the 1,500 meters at the Olympics in Beijing this morning. The only U.S. runner to make it through, Rowbury qualified for the finals after finishing fourth in her heat with a time of 4:03.89. Rowbury will race in the finals Saturday at 7:50 a.m. EST.

Lots of news around these parts: Team USA romped over Australia this morning, Reggie Love was featured in an E:60 story last night, 1,700 freshmen moved into East Campus dorms yesterday. We’ll bring you more news in the coming days when daily production starts again (orientation issue Friday, normal schedule begins Monday), but before the grind, we decided to break it up and provide you with The Chronicle’s Sports Blog’s first Wordle, which is described on its own site as a “toy for generating word clouds from text that you provide. The clouds give greater prominence to words that appear more frequently in the source text.”

What better way to experiment with this new “toy” that put it to the test? We submitted the URL for the collection of July posts, and here’s what Wordle spit out. 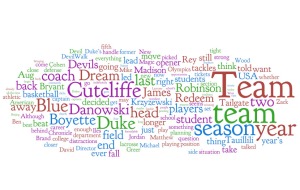 Consider this a new monthly feature: on the 1st of every month, we’ll show you the Wordle for the previous month. Don’t forget to keep us on schedule.

If there are any other tricks out there that you’d like us to incorporate, don’t forget to drop us a line, either in the comments section below or by e-mailing Sports Editor Ben Cohen at bzc2@duke.edu.